Members of the U.S. Congress returning from the Fourth of July break have only 33 work days, accounting for their scheduled August recess, to negotiate agreement on President Trump’s federal budget proposal in time for the October 1 start of the 2018 federal fiscal year.

The president’s proposed budget would cut $54 billion from “non-defense” programs that provide job training, housing, health care, and education for tens of millions of Americans, to bolster spending for the military and border security. It proposes unprecedented funding cuts across multiple federal agencies, including the National Institutes of Health and National Science Foundation, and the complete elimination of 66 federal programs. The president called his plan “A New Foundation for American Greatness,” but it has left many in our nonprofit sector wondering: Great for whom? 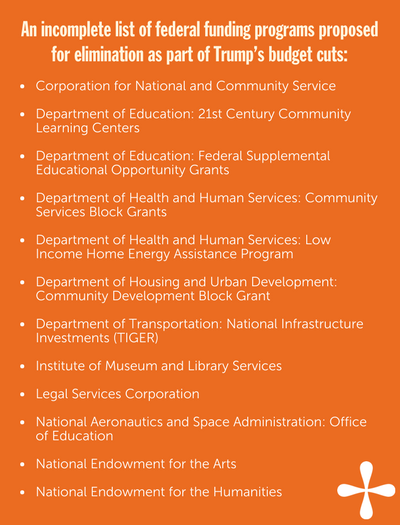 How significantly could Trump’s budget cuts impact the nonprofit sector? Such cuts could be financially destabilizing and even devastating for the organizations that count most heavily on government funds as a key piece of their funding mix, especially human service agencies, which claim nearly half the funding awarded from all government grants and contracts. But even organizations that don’t receive government funds are at risk for reduced grant funding overall, because of increased competition for non-government resources as organizations struggle to fill the funding gap.

The nonprofit sector, which represents about 10% of private sector employment, is advocating hard to protect itself. Earlier this year, arts and culture leaders responded swiftly to Trump’s call to shut down the National Endowment for the Arts (NEA) in 2018. The president justified the cuts by asserting the arts shouldn’t take funding priority over the needs of working families.

As if in response to his claim, the NEA released data demonstrating that the arts sector aids families and communities by creating jobs and stimulating economic growth, to the tune of $730 billion contributed to the US economy in 2014. This benefit also extends to individual states: in Ohio, where the NEA has awarded its second-largest statewide grant for the last seven years (second only to California), “creative industries” support nearly 231,000 jobs and contribute $32 billion to the state economy, according to research by Bowling Green State University.

Arts and culture organizations are rallying supporters to action. The American Alliance of Museums, an association of 35,000 museum professionals and volunteers, is leading a public campaign to convince members of Congress to defy the president and support funding for federal programs that support museums. Similar efforts, like the #SAVEtheNEA campaign by Americans for the Arts, are gathering steam around the country.

It seems Congress may be listening. In May, Congress approved $150 million each for the NEA as well as for the National Endowment for the Humanities, an increase from 2016, as part of the 2017 omnibus spending bill to fund the government through September 30. Arts advocates celebrated this as a short-term victory, but the NEA and other agencies are still vulnerable to cuts in 2018.

The nonpartisan Center on Budget and Policy Priorities estimates that the proposed budget translates into $2.5 trillion in cuts to programs for low- and moderate-income people over the next ten years. But a reduction in federal funds to nonprofits will not reduce the human need for these programs and services: the Urban Institute projects the need will actually grow as shrinking budgets make it difficult or impossible for nonprofits to maintain current service levels.

The pressure on nonprofits to meet demand for services with fewer federal dollars will presumably put pressure on private foundations and donors to fill the gap. Tim Delaney, president and CEO of the National Council of Nonprofits, explains that the Trump budget “silently, yet effectively, targets private philanthropy as the fallback subsidy for government programs that would be downsized or eliminated.”

In fact, the $54 billion in federal funding that is part of Trump’s proposed budget cuts is roughly equal to the total annual dollar value of grants made by U.S. foundations ($58.46 billion in 2015), meaning foundation giving would have to double to maintain existing levels of grantmaking and cover the federal funding shortfall. According to the Forum of Regional Associations of Grantmakers: “Philanthropy cannot fill the gap.”

Yet some funders seem willing to try. A survey of foundation CEOs by the Center for Effective Philanthropy found that roughly one-third are shifting their programmatic goals and budgets in response to changes since the 2016 presidential election. The William and Flora Hewlett Foundation recently awarded $63 million in grants for climate change, reproductive rights, women’s health, democracy, and other causes the foundation believes to be under attack. And The George Gund Foundation made its first round of grants for 2017 to defend human needs “now being threatened in the emerging federal policy environment.”

Some funders are calling on their peers to make even more radical changes. A survey conducted in April by Exponent Philanthropy, the country’s largest association of funders, shows that 82% of funders surveyed expect philanthropy will play a more important role in society as a result of changes in Washington, DC. Pam David, Executive Director of the Walter & Elisa Haas Fund, has encouraged foundation boards to reconsider spending policies and put more money into grantmaking because, she says, “extraordinary times require extraordinary responses.”

For now, President Trump’s FY18 budget proposal is just that: a proposal. The U.S. Congress must yet conclude a robust, politicized budgetary process in the weeks leading up to October 1. Only when the federal budget is finalized will we know what programs will indeed be cut or eliminated, and begin to understand and anticipate the impacts on our nation’s nonprofits and the people whom they serve.

Beyond Trump’s budget cuts: Other factors that influence the funding future for nonprofits

Individual giving: Since Trump’s election, some nonprofits are experiencing a surge in individual donations, historically the largest category of charitable support and a key complement to grant funding. Charity Navigator reported that within 100 days of Trump’s election, arts and humanities organizations saw contributions increase by 294%, environmental groups by 388%, and civil and human rights organizations by 1,263%. The challenge to these organizations is to steward and maintain these new individual donors even after the “Trump effect” wears off.

Tax policy: Trump’s proposed tax reform, which includes raising the standard deduction, could reduce incentives for charitable giving, according to the Urban-Brookings Tax Policy Center. However, some believe that a stronger economy will translate into increased charitable giving. According to Adam Michel, policy analyst at The Heritage Foundation, “If tax reform is done properly, there’s growth that happens as a result. When the economy is doing well, and people have more money in their pockets, they donate more.”

Social Ventures and the “B” Corp: Since 2010, thirty states have passed legislation allowing businesses to become “benefit corporations” that value maximizing social good as much as maximizing profits. It’s too soon to know how extensively these hybrid corporations might lessen the burden on nonprofits to address social problems, but some social venture enthusiasts consider them a “possible bright spot” on the horizon.